I’ve finally had a bit of time off to do a little painting and thought I’d try and paint the newest items I’ve made, Victorian Post Boxes. Quite a few people have asked for me to make Victorian Post boxes and so I decided to make not one – but three different types. An early, mid and late Victorian. You can read about them here… http://en.wikipedia.org/wiki/Pillar_box 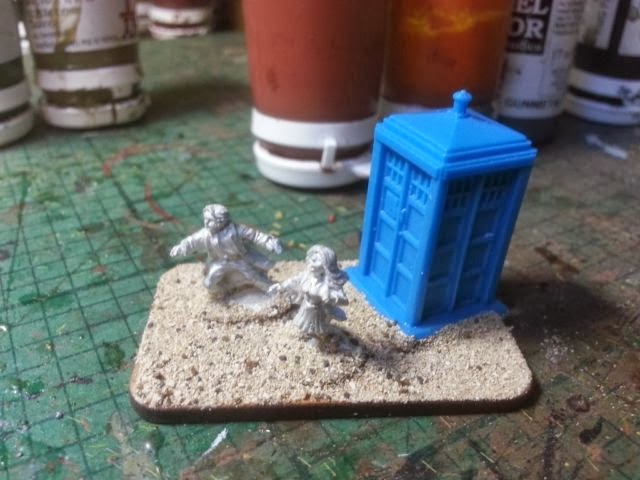 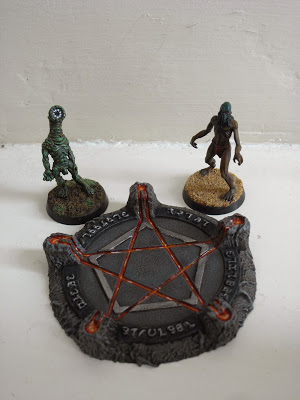 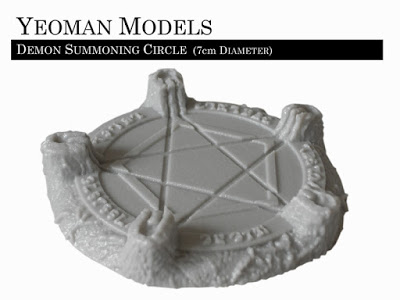 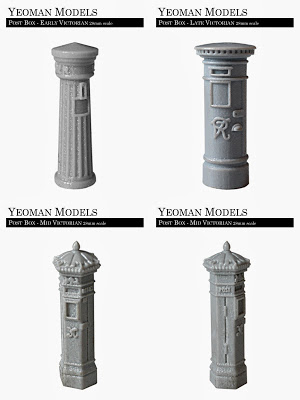 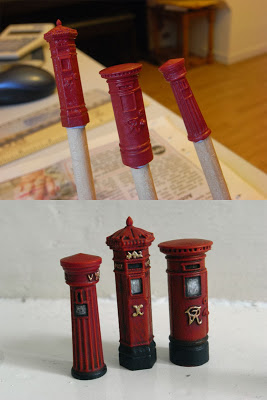 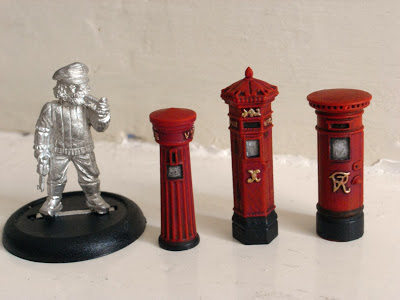 I’m rather happy with the results of these miniatures and managed to get some nice detail on the 28mm scale boxes. I think the Mid or ‘Penfold’ box is probably my favourite. I reckon that most people will imagine that post box if they think of Victorian pillar boxes. I’m rather happy that you can see and paint the words ‘Post Office’ on the side of the box.

The Early Grecian Column style post box looks so odd to modern eyes. It even has a vertical slot for the letters! It’s also very small but I guess there was far less post back then.

The later box has a VR emblem on the front that I’ve painted in gold. It’s kind of crazy to think that this late post box design has changed very little in all these years.

To paint the boxes first by spraying them with a black undercoat then a dark red. I then gave it a darker red wash before dry brushing it with a rich bright red. Then I painted the black bases, white for the ‘collection plate’ and gold for the detail. I used the dark red again for painting the little details like the locks and hinges. A very watery black wash was used on the ‘collection plate’ white to finish off.

The unpainted post boxes are available to buy on my ebay page.

A model I made a while ago was the medium sized Demon Summoning Circle but I haven’t managed to get around to painting it until now. You can see my painted Large summoning circle on this previous posts on the blog.

To paint this one I started with a black undercoat and dry brushed a few dark greys getting lighter and lighter. A liberal amount of brown wash was used to show all the rough detail on the sides. the stonework only really comes to life when a final light grey drybrush was used to bring out the detail of the stonework. I decided to paint the pentagram to try and make it look like lava. I’m not sure if I succeeded but what I did was to paint the lines with a dark red, then a lighter red. A red wash was used before then painting long splotches of orange, then in the splotches I painted yellow, then in the yellow I painted tiny bits of white. I then painted a gloss vanish over it to make it look a bit shiny. Silver was used on the pentangle and the demonic glyphs around the sides. the Glyphs do mean something by the way!

I added a few Lovecraftian monsters I painted a couple of years ago to this picture to help with the atmosphere, or should I say atmos-fear!

Wayne from http://weirdwars.pbworks.com bought one of my Police Boxes and added the Doctor and Companion to a scene. As you can see he’s just started the mini diorama but it’s already looking quite promising! I would also suggest if you like Weird WWII sci fi stuff to check out his blog. It’s crammed full of crazy diesel punk war vehicles. Tank Tripods and British UFO’s! All expertly built and painted. Check it out!